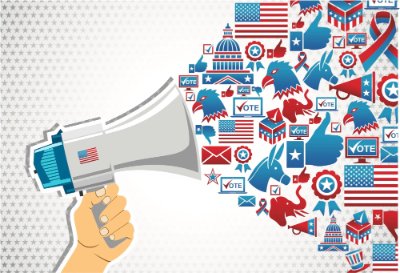 What Politicians Could Learn From Marketers

I’ve got to be honest, I never thought this would happen. All my life I have been quite anti-politics (much to the ire of my family) and while I keep up to date with what’s going on, my interest in the subject is limited to almost 0. However, recently I’ve started to think. Politicians who are out to secure votes and win the public’s confidence – like they currently are for the general election – aren’t really all that different from the business owners I work with every day. They are reaching out to people and trying to convince them to buy into their promises and their abilities. And this got me thinking. What tips could politicians take from marketing gurus that would really help them appear likeable and gain that confidence?

If you want to market an idea, you need good, strong branding. Figuring out what you stand for and how you come across is an essential part of marketing, and it’s something politicians often try – but fail – to do. It’s actually something that Jeremy Corbyn has been very good at. He has staked out his views and beliefs (aka his brand) and he has stuck to it with a stony-faced defiance that you can’t help but admire. Like it or not, political parties are brands, so they have to stand out in a crowded and noisy marketplace, just like any other brand. The ideologies you stand for as a politician are exactly the same as those you would employ as a business owner. But your success will only be as strong as your branding – so the more thought, time and effort invested into it, the more memorable you will be. Notice there that I didn’t mention money there. Good branding is not always the most expensive or flashy – it’s the one that’s been best thought through and most consistent.

For a business to market itself effectively, they need to research their target market, find out what matters to them and speak to that. It’s the basics of good marketing, and you will find the brands with the most successful campaigns are the ones who have done comprehensive market research. Once you understand who you’re talking to and what’s important to them, it makes it much easier to sell yourself to them. Granted, that’s much simpler when you’re selling a product or service as opposed to a philosophy, but the general idea is the same. But what I see in reality is politicians who have completely missed what motivates the general population in a leadership campaign. It’s not tax cuts, it’s not grand empty gestures, it’s leadership – with substance. If politicians were more attuned to market research, there might be more community focussed policies and popularity around politics.

Once you have a brand, it’s important not to go off brand, and not to lose your dignity along the way. For example, when McDonald’s challenged about their ingredients, they carefully planned films and broadcast a series of videos and other adverts that spoke directly to that concern. They came across as open, honest and trustworthy, and the brand came out the other side better than when they entered the fray. But what’s that got to do with it? Well, we have all seen the politicians (not always British ones) get drawn into irrelevant sideline discussions and enter schoolyard style brawls in an attempt to dirty their opponent. Whether it’s who can be tougher on immigration or which of them cares more about a certain issue, these petty arguments always result in lower confidence and lost votes. As a business with a strong brand, you know who you are and what the issues really are – so you should be able to handle the bumps in the road without getting rattled. Instead, rise above the rest of it and maintain your brand values consistently, and you will always come across the better party.

The inspiration for this entire post came from one simple fact – this years’ local elections were held on May the 4th. Now anyone who is or knows a Star Wars fan (so basically everyone) knows the cult popularity of this date, which is unilaterally known as ‘Star Wars Day’. So why, on local election day, did not a single election candidate in the South (I can’t speak for other areas) capitalise on this fact? In a time where politicians are desperately trying to appeal to the younger generation of voters, showcasing that they are at least aware of their culture is a no brainer. Sure, dressing up as a Jedi at the polling station might be going a bit far, but as far as engaging and unique publicity goes, this was an open and depressingly empty goal.

And so at the end of it, I’m still not all that interested in politics (but yes, I am voting this year, so no comments about that please). I truly believe that politics needs a complete rebrand, to take us away from a system that leaves so many disengaged and disappointed with the way the country is run, but feeling like they have no voice to say so. And to do that, politicians should definitely take some advice from the marketing world.

4 Tips To Get Your Business Blogging Right Every Time

When it comes to marketing your business, it’s difficult to work out what’s worth doing, and what would be a waste of money. And even once you’ve got it all sorted, it can be a challenge to find the time to do it all, especially if you’re running the business on your...
Read More

When I talk to people about copywriting, it always surprises me. Not that some people think I work in copyright law (I’m very used to that mix up), but that a lot of people don’t consider it as a skill that requires a lot of learning to do well. In some cases, they’re...
Read More

More specifically, let’s talk about how our whole view towards this innocent little word has been completely skewed by the school system, and how we can set this right. You see, today (March 4th), is National Grammar Day. So I would be remiss if I didn’t use it to...
Read More

6 Reasons You Should Hire A Copywriter This Year

Truth time. Was creating content on your to-do list for 2018? If it was, how much of it did you actually manage? Did you start that company blog and keep it going? Refresh that website, or write that fantastic e-book that’s in...
Read More

What Is PAS, And Why Do You Need It In Your Copy?

Copywriting isn’t a paint-by-numbers process (sorry folks!). There is no secret formula for you to follow to produce magical, compelling copy just by filling in the blanks. But that doesn’t mean there aren’t formula’s out there that can help you. To give you a...
Read More

This site uses Akismet to reduce spam. Learn how your comment data is processed.